(805) 646-6635 Innkeeper@LavenderInn.com
Mr. and Mrs. Hope
If you’ve stayed at the Inn, then you’ve definitely had the pleasure of hanging outside with Mister Hope, our mascot kitty. You know he loves to be pet, mingle with the guests and eat everything he can. But, what you might not know is the story of how he arrived!

About 7 or 8 years ago, a different black cat decided to take residence in our garden. She was wild and no one could come near her. No matter how hard you’d try, she just wasn’t having it.

Then, sweet Hope came around. Hope was one of the most “kind, easy going, elegant and composed” ladies, said Beth Keenen, Innkeeper of ten years. Although it was heartbreaking for everyone that she was diagnosed with Breast Cancer, she handled it with as much grace and courage as possible. Lucky for us, she spent some of her most meaningful moments at Lavender Inn.

She arrived to one of our Inncourage Cancer Retreats that we hold here once a year. On one of the lovely days, Hope decided to sit in the garden alone and get some sun. Then, the impossible happened. The wild cat walked into the garden and right onto Hope’s lap! Everyone crowded around the window, absolutely shocked. Unbelievable.

On November 30, 2013, Hope and her high school sweetheart decided to have their Commitment Ceremony at the Inn. It was a beautiful Fall wedding and she looked adorable wearing a black cardigan over her beautiful, white wedding dress. A few years later, she passed away.

If you haven’t guessed already, we named the wild black cat after her for clear reasons. Mrs. Hope then became the Inn’s mascot and loved all of our guests. She would sit on the front porch people watching, would actually do yoga with everyone during our yoga retreats, and she LOVED weddings! She quickly became one of the most unique cats anyone had ever known.

A couple years later, another mysterious black cat showed up! Like Mrs. Hope was in the beginning, he was terrified of people and you’d be sorry if you went near him. But just like Hope taught her to trust people, Mrs. Hope taught him the same. He slowly warmed up to guests and would follow Mrs. Hope wherever she went. They were constantly being found sitting together on our front porch and were the best of friends…so we named him Mister Hope of course.

Mrs. Hope passed away about a year later. We were devastated, and so was Mister. As soon as she passed, he never went to the front porch again…still till this day. But, we are happy to say that he has turned into one of the most loving, social and funny cats we know. We owe all of this magic to the original Hope, who will be in our hearts forever. 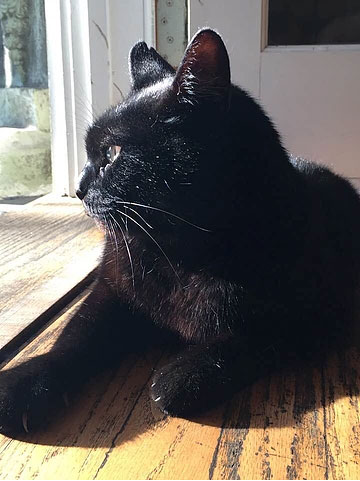